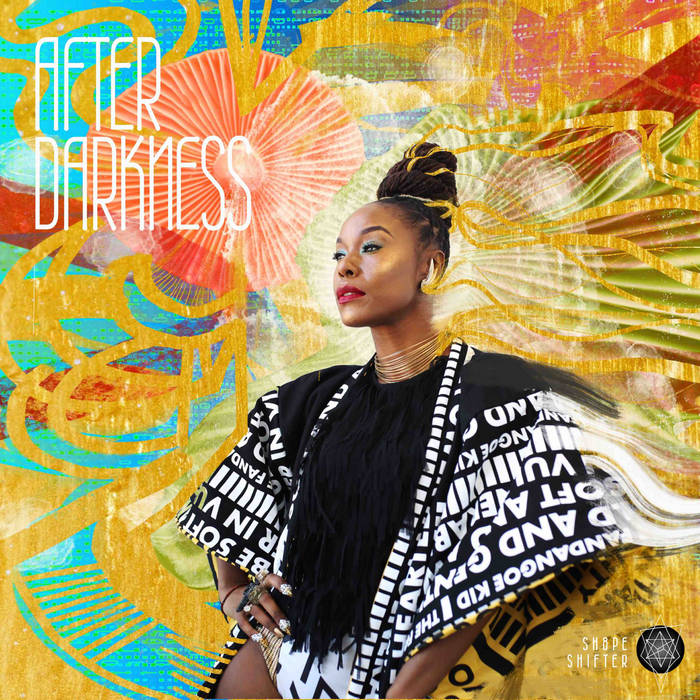 As an entrepreneur, Zakiya Harris (a.k.a. Sh8peshifter) is a
visionary figure helping to advance opportunities for Oakland’s under-resourced youth in the black community. By night, Sh8peshifter enchants audiences through a kaleidoscopic lens with her fusion of hip-hop and electronic beats dripping with supernatural vocals. On her latest EP, After Darkness (Release Date: September 27, 2019), Sh8peshifter leaves an indisputable impression as a force on the front lines fighting for the betterment of Oakland.

An Oakland native herself, Sh8peshifter traverses the globe in search of enlightenment within diverse genres of music and dance.
From Senegal to Jamaica to New York City, her travels inform her sense of culture. Her home of East Oakland silhouette’s a fierce artistic identity sculpted over the past two decades. After graduating Rutgers University (New Jersey) while working in public interest law at the World Trade Center, Sh8peshifter emerged as a performer of note in the Brooklyn club scene during the hip-hop renaissance instituted by luminaries Mos Def and Talib Kweli; the latter of which Sh8peshifter opened for at San Francisco’s live music institution, Stern Grove Festival.
Upon returning from NYC to Oakland, Sh8peshifter’s grassroots pursuits led to co-founding nationally lauded initiatives, including Impact Hub Oakland, Hack the Hood (winner of Google Impact Challenge grant for $500,000), and Toyota’s Grind for the Green. As a speaker, Sh8peshifter has presented at Tedx Denver, The National Convention of Black Journalists, and the NAACP National Convention. With the release of her book, Sh8peshift Your Life: The Creative Entrepreneur’s Guide to Self-
Love, Self-Mastery &amp; Fearless Self-Expression, Sh8peshifter leads workshops at prestigious universities across the country, including at University of California, Santa Cruz; San Francisco State; Livingstone College, and others. Sh8peshifter was named “One to Watch” by Grist.org.

While living the American dream as a happily married black woman, homeowner, and successful entrepreneur, Sh8peshifter’s life
was swept up in a whirlwind of change a decade ago when she lost her home to foreclosure at the height of 2009’s housing crisis.
A mother of a beautiful daughter, Sh8peshifter ended her marriage and was laid off while non-profit budgets diminished during the Great Recession. Following a bicycle accident that left a permanent facial scar, Sh8peshifter channeled her losses into a mantra destined for exponential growth. At this crossroads in her life, Sh8peshifter fully realized her creative impetus and took a deep dive into releasing music.

After Darkness opens with “Abracadabrakaafrica,” an empowering anthem that showcases the vigor of black women in America. Amid spellbinding beats and electric guitar work, Sh8peshifter proclaims that, “black woman is God.” Sh8peshifter composed the track in memory of Sandra Bland, an African-American woman pulled over by police during the height of The Black Lives Matter Movements who was suspiciously found hanging in a jail cell in Waller County, Texas.  “For myself, my daughter, and my community, it was essential for me to pay tribute to Sandra Bland as a black woman who is God,” says Sh8peshifter.

After Darkness concludes with an ode to 1980s-inflected punk rock on “Runaway.” The uplifting narrative offers sage advice to do more than just live. Sh8peshifter encourages the listener to thrive to their greatest potential. “Sometimes when you see crazy coming down the street, you need to run away. You have a choice to leave those who are not serving you in positive ways.”

Sh8peshifter makes music art through ritual. While her music has been compared to the works of Janelle Monáe, Erykah Badu and MIA, this Oakland-based performance artist occupies a world of her own. A soundtrack to #BlackGirlMagic and beyond, her afro-eclectic mix of soul, dance and theater inspire folks to find the divinity within and bounce their booties to the bassline. ... more

Bandcamp Daily  your guide to the world of Bandcamp